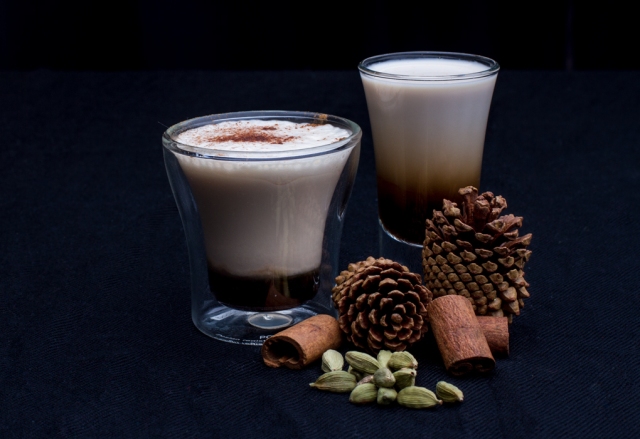 I love tea. My dad got me into Earl Grey years ago, and if I am looking for a solid anytime tea, that is my choice, with milk and sugar (never could go black). But if I was to choose a hot drink for comfort, for curling up on the couch and reading a book, I would go to my stash of Chai Tea, brew it up with honey and milk and sit back and relax to the aroma of cinnamon, ginger & cardamon.

According to the Mighty Leaf, chai tea is 5000 years old and originates in the courts of Siam and India, created originally as a healing drink. Considering the health properties of ginger and cardamon are said to include assisting with nausea, infection, colds and flu; and cinnamon also is said to have similar properties, assisting with colds, infection and upset stomach; it doesn’t surprise me that one would turn to this drink for comfort and has become popular across the globe.

Chai now comes in vanilla and chocolate flavours, in lattes and in iced drinks. So how about creating a shooter?

In order to create something authentic I went back to the basics and found a recipe for chai tea —from scratch— and made up a strong chai infusion as my base. You can find both this recipe and the recipe for other common chai drinks here. Here is how I altered it for my purposes

Put cinnamon, pepper, cardamon and cloves into ziplock bag and crack with rolling pin or hammer until broken but not powder. Add to water, teabags and ginger in a pot and bring to a boil. Reduce heat to medium and simmer for 10 minutes. Remove from heat and steep for 1 hour. Add sugar and boil 5 minutes until sugar dissolves. Cool and strain with double strainer. Return liquid to heat and simmer 30 minutes to concentrate syrup. Cool and store until needed in fridge.

Pour chai infusion into shot glass, mix cream and cinnamon syrup in a cocktail shaker with ice and layer over chai infusion. Serve.

In order to create a strong flavour I blended cinnamon syrup with cream and layered that over the chai infusion in a shot glass. The result was a stronger hit of cinnamon, similar to if one had topped their latte with ground cinnamon, and sweetening the first flavours hitting the tastebuds.

This would be lovely as a hot drink too, using heated chai infusion and frothing the cream and syrup before pouring over the drink and served in a demitasse.